By definition, ‘vaping’ is the act of inhaling water vapor through a personal vaporizer or electronic cigarette. Vaping eliminates 4000 chemicals and carcinogenic compounds that come from real cigarettes, without compromising the act of ‘smoking’ itself. Vaping can also contain nicotine as an option for maximized effect of cigarette smoking.

What are the benefits of Vaping?

What are Electronic Cigarettes or E-Cigs?

Electronic cigarettes (also known as e-cigarettes or personal vaporizers) are an alternative to tobacco cigarettes. They are battery-operated devices that create a mist or vapor that is inhaled instead of smoke. The rechargeable battery powers a heating element called an “atomizer.” The element uses low heat to turn  liquid in the cartridge, which contains propylene glycol, glycerin, food flavoring and nicotine, into a fog-like mist.

There are many models of e-cigarettes available. Some look like traditional cigarettes, others look similar to a pen and some even look like small flashlights. Some have LED lights, some have built-in liquid reservoirs, others have combined atomizer cartridges, some are tubular and some are even rectangular boxes. They come in all shapes and sizes and have different features for former smokers who wish to distance themselves from anything resembling a traditional cigarette or want a longer battery life and/or better performance. [casaa.org]

While anything containing nicotine cannot be called 100% safe, evidence from numerous studies strongly suggests that they are magnitudes safer than tobacco cigarettes. Harm reduction experts can point to research supporting that switching from cigarettes to a smokefree product will reduce health risks to less than 1% of smoking traditional cigarettes – nearly the same as non-smokers. For tobacco harm reduction health professionals, it is misleading and irresponsible for public health officials to tell smokers that smokeless products, such as e-cigarettes, are “not a safe alternative to smoking” simply because they are “only” 99% safer and not 100% safe. [casaa.org] Also check out “No Health Concerns in E-Cig Vapor!“

Are e-cigarettes approved or regulated by the FDA?

The FDA currently considers e-cigarettes to be  tobacco products. Originally, it claimed that e-cigarettes are being used as smoking cessation devices and therefore they needed to be regulated the same as pharmaceutical nicotine replacement therapy drugs (NRTs). In 2009, the FDA ordered customs officials to start seizing e-cigarette shipments coming into the country.

Contrary to some media reports and comments by legislators, regulation as a “tobacco product” under FSPTCA does not mean that e-cigarettes are automatically regulated in the exact same manner as tobacco cigarettes, ie., subject to PACT, flavoring prohibitions and indoor use bans nor subject to the same tax rates. However, it does mean sales of these products to minors are finally prohibited by law. [casaa.org]

What do you need to get started?

The initial investment can be as low as $20-30 all the way into the $100’s. I would recommend a budget of around $50 to start. This is to get some quality gear but not spending too much in case you don’t like vaping.

There are several types of “E-Cigarettes”. Here are the main classes as described by the American Red Cross. 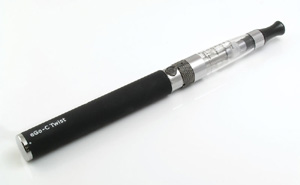 Here’s where you start getting into the type delivery devices that I suggest. There are tons of companies making these style e-cigs. These have a battery inside a tube typically and are rechargeable. The battery, measured in (mah) vary in size. Instead of a disposable atomizer, they usually come with a clearomizer that allows the user to refill with eliquid of their own liking. Instead of taking a drag and it just working, these usually have a button that activates the coil to heat the juice. This method allows you to take a pull of your own desired length. You can get a lot or a little depending on how long you hold the button down. With these type e-cigs, you can start customizing looks and clearomizers to your personal taste too. .  These are larger than regular cigarettes.

If you are getting started with the Pen or Tank styles, you’ll also need ejuice. There are 1000’s of ejuice or eliquid choices online. Most brick and mortar shops stock several lines of juice from makers that they trust. I would recommend visiting a local store (directory) and taste test flavors before ordering online.

The Ultimate Guide To Buying Your First Vape
July 10, 2019